I’ve just had a wonderful weekend in the bosom of my birth family. Five of seven Prescott siblings spent time together at Lake McConaughy in the Nebraska sand hills. It has become a sort of tradition as we make our ways from eastern Colorado and eastern Nebraska to meet in the middle. It is the way we spend Christmas together, if not actually on Christmas day. The next generation and their significant others join us and are not too put off by the goofiness and teasing of those who are now the elders.

Yup. With Susan crossing over to her sixth decade in a few months, we are now officially a majority of sixty-somethings. 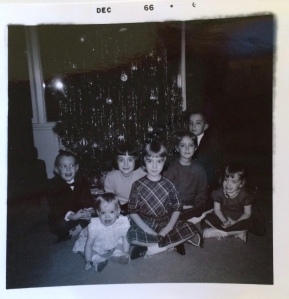 That seems weird as I contemplate the Christmases of our youth. Our gang of seven kids would descend upon Grandpa and Grandma Piskac’s home along with the cousins who are the children of my dad’s siblings. I can only remember it vaguely because I was so young, but I think my grandparents on that side must have been saints to invite such mayhem into their house. People were everywhere! As we got older, and grew to ten, it moved to our house. How those gatherings can still make me smile as I remember the fort of presents around the tree and Aunt Hon’s Christmas tree cake and Aunt Tillie’s box of perfect cookies. And people were everywhere! When Jana and I bought a house to ease the burden on our parents, the celebration moved to Chicago Street. Potluck food! More Christmas cookies! Even more cousins! People were everywhere!

I appreciate the quietness of Christmas now, as Jana, Steve and I will open our gifts on Christmas day after spending Christmas Eve at the candlelighting service at our church. The advent wreath will be fully lit: purple, purple, pink and purple, for hope, peace, joy and love. The center white candle will also glow with the incarnation, the presence we have anticipated and waited for these past weeks. The quiet singing of Silent Night, Holy Night, as the church family passes the light from candle to candle has come to represent for me the perfect experience of oh holy night, the night that Christ was born. Because it was quiet, right? Says so in the song.

I have come to believe that it is especially those moments, in the bosom of family gathered, whether birth family, adopted family or church family, that is the Christmas story of Christ’s birth. In traveling back and forth to the Middle East for almost ten years, I have been a grateful student of those of who live in that context. They live and raise families in the place where Christ was born. They introduced me to a scholar named Kenneth Bailey who gave me a whole new vision of how that holy night was experienced by the family of Jesus, the Immanuel, God-with-us. And I’m pretty sure it wasn’t a silent night!

We think of the words of Luke 2:7, “And she brought forth her firstborn son; and she wrapped him in swaddling clothes, and laid him in a manger, because there was no room for them in the inn,” and believe that Jesus was born to his parents alone in the night, rejected by everyone. Oh, that innkeeper! How rude! But read that link and discover this word: kataluma. That is the Greek word used in the passage that is not the same word for inn used in the story of the Good Samaritan. It is a word that describes a part of a typical house of that place and time where guests would stay. At this time in the world, all were gathering for the census and people coming from all over would go to their ancestral homes for the count.

In other words, Joseph’s family’s home was packed! People everywhere! No room in the kataluma, because the house was stuffed! Middle Eastern hospitality says, “Family! Come in anyway! All we have left is the place where we brought the animals in to warm and be warm, but you are most welcome!”

That’s where Jesus was born…in the bosom of family. Most welcome.

“Most welcome” are two words I hear over and over as I travel to be in the bosom of family in Lebanon, Syria and Iraq. Right now it is nine time zones ahead of me and the darkness of night has settled in there. Candles are being lit. Hymns are being sung. And the darkness of war and protest and violence does not overcome the light that is born this night. If I was there, I would be most welcome, and so would you. We would gather around that manger and marvel at the gift of God-with-us.

Jesus is born in the bosom of family. Oh come, let us adore him. You are most welcome.

I love that story of the young Jesus. I’m not a parent so I cannot appreciate the worry they must have when a child turns up missing, but I can appreciate that this child wandered to the place where God would be: His father’s house, gathered together with those who could teach him about the Father.

I love family gatherings! Indeed on the weekend before my 59th (egad!) birthday just one week ago, my siblings gathered as family with assorted spouses and children in a big house in the sandhills of Nebraska to celebrate our Christmas. It’s the only way the Colorado Prescotts and the Nebraska Prescotts can meet halfway in neutral territory where no one has to host, but everyone contributes.

It is reminiscent of Christmases in our youth when we would gather at Grandpa Piskac’s house with all the cousins. When the George Prescott clan grew to seven children, that gathering was eventually moved to the George Prescott house. When the family kept expanding with grandchildren and cousins and second cousins, and the responsibility of hosting grew ever larger, it moved to the house Jana and I purchased for just that reason on Chicago Street. That tradition eventually disappeared as families kept expanding and wanted to start their own Christmas traditions.

Over all those years we lost so many of the familiar faces who would make those gatherings so special. Bubby Piskac. Grandpa Piskac. Aunts and uncles and eventually our own dad who left us in 2007, and our own sister Cathy, the baby of our family, in 2013.

For the six of the George Prescott children who remain after the loss of our Cathy four years ago, it is still important that we do gather. And so we meet at the lake. We cook. We eat cookies! If the weather is good like it was this year, we hike. We look for eagles. We laugh. We hug. We gather. The family gathers. 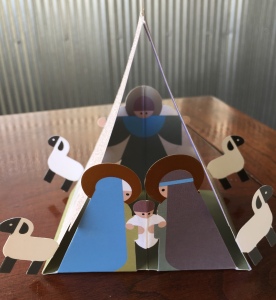 I know of other families who gather as well, and they gather in the Father’s house. I have watched over the last two days as the family of God has gathered in Basra, in Homs, in Aleppo, in Mahardeh, in Hasekeh, indeed all over Syria and Iraq. With all of the loss they experienced though years of war, they still gather in the house of the Father, light the Advent candles, sing the carols, lift the prayers, and welcome the Christ child into their homes, their lives, their hearts. They follow the star to where it leads…the incarnation of God lying in the manger.

For me, it is the family gathering at church on Christmas Eve, that is the best gift of Christmas. For my church, West Hills in Omaha, this has been a difficult year. Though a difficult transition in leadership, many have left. Elders like Steve, who built so many VBS sets that transformed the building into castles and swamps and airfields. Leisha, who traveled with Steve and I to Germany on our honeymoon mission trip. Gene, Janet and Barb, who all served in worship and music. Oh! How their voices are missed in the choir. Henry and Paul who worked so hard on making our building welcoming and well kept. So many others, too numerous to mention…all missed and not gathered with us on the twenty-fourth as we lit the candles.

When the family gathers, we miss the ones who are not present, even as we revel with the ones who are. Sitting in the choir loft last night before the service began, I was feeling the joy of that night just as I have for so many years. And then the gift appeared. Melissa, whose family had departed back in the early spring, came up on the chancel to hug our organist. I blinked twice to clear my eyes. Yes! It was Melissa! Which meant that Kevin was there as well. When the service was over, I found them all for Christmas hugs, and thanked them for being there.

“Where else would be on Christmas Eve?” Kevin asked. “Truth be told, it was Mia. Mia is why we came.”

Mia is Kevin and Melissa’s high school senior daughter. She had been raised at West Hills and confirmed there just a few years before. This is the church – the family – that she has spent Christmas Eve with for as long as she could remember. Where else should they be, but the Father’s house?

So eat the cookies. Light the candles. Follow the star…to the manger, to Grandpa’s house, to the Father’s house.