My friend the padre’s heart groans like mine. Join me in his prayer. Dona nobis pacem. Grant us peace. 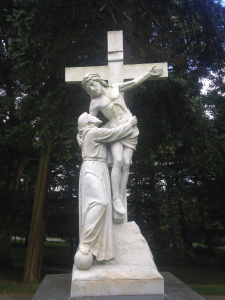 My heart aches today, Lord
Nine lives taken senselessly
A church is supposed to be a place of refuge
Last night it became a slaughterhouse
So much hatred in this world
Lord, your heart must break
We are all created in your image
Called to be sisters and brothers
Yet my sisters and brothers of color
Are treated as less than human by some
You know the pain and the sorrow
Your son hung upon the cross
Tortured and murdered by the Empire
Lord, I don’t know what to pray
Hear the groans of my aching heart
Comfort all who mourn
Dona nobis pacem
Grant us peace

Emmanuel African Methodist Episcopal Church mourns… our nation must mourn… this must stop… love can overcome hate… color of skin is just that… color… we are all God’s children… each one of us… regardless of race, gender, religious belief, sexual orientation, ethnic background……

I have been praying for peace for a long time, and lately I have prayed through the folding and stringing and hanging of paper cranes, 323 at last count in my office. It is a beautiful sight when I come in every morning, and catches others by surprise as well.

They are the colors of the rainbow, hanging on their strings, separated by glass beads and hugging my world map, a map that also reflects those same colors.

And tonight I walked in my garden, which is showing many of those same colors. The oranges of day lilies, the blues and violets of cranesbill, white daisies with bright yellow centers. And so many greens! That God of ours had way more than 64 crayons in his box when he started this whole garden thing.

And so as I walked through my garden tonight, I was reminded of my peace cranes by the colors of the flowers and the greenery and the way the cranesbill and daisies tangle together, just like the strings of the cranes when I brush by them and it made me smile and it stopped me in my tracks to say it again:

As I came around to the steps that take me up to our little circular terrace, a place that is our secret room where we sit on Fridays and Saturdays and enjoy the peace of the garden after a long day, I passed my peace pole which contains another prayer in five languages:

May peace prevail on the earth. 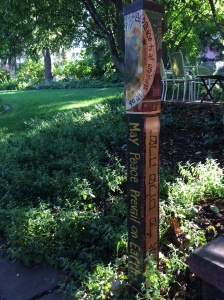 As I walk through this peaceful garden with prayers on my mind and on my heart and on my peace pole, I am also reminded that I am not in this alone. Just as the daisies are a gift from Susan and Lee next door and so many of the day lilies came from my cousin Kathy, the cranes in my office are a reflection of those praying with me like Cleo and Wendi and Deb and Kathy and Wilson from church; and all the faithful women like Babs and Marilyn and MC and Kate and Sue and Wendy and Betty and Emily; pastors whom I have met and those I haven’t, the Tobies and Michaels and Tripps and Chrisses; and all the people who read the papers and weep with me.

God made the garden for us as a place to walk with him in peace, and we blew it. And we continue to blow it. But even still, he makes the flowers grow and the cranes fly and invites us all to walk in places with him, inviting us into conversation. And my conversation with him most days – every day! – is for his peace to prevail.

And I believe he hears us.

And I believe he listens to us.

And I believe he will answer and redeem and make it so.

I believe his peace will prevail on this earth.

And so I will keep asking. 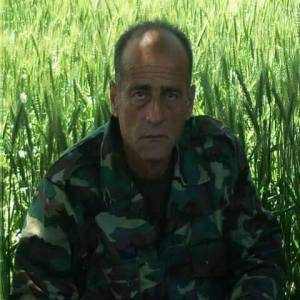 I am on the worship team this Sunday at church and the special song we are singing is Laura Story’s “Blessings.” It is a lovely song and I am happy to be singing it with three good friends for the glory of the Lord.

We pray for blessings, we pray for peace, comfort for families, protection while we sleep.

And it’s true, we pray for all of that. Peace, peace, peace, has been my prayer these last four years especially, since my traveling to the Middle East started.

But today I am centered on these words: protection while we sleep.

Protection while we sleep…

We had it in spades on our trip to Damascus in January, 2014, and I didn’t even realize it until the last day we were there. We would come up to our room in the hotel and there would be two or three normal looking men sitting in the lobby on our floor, like they were waiting on their wives or something. When we left in the mornings to accomplish our schedule and make our visits, there they would be again. Back and forth and back and forth for our three days there, those gentlemen were always in the lobby on our floor.

Walking through the Christian quarter in Damascus after having visited the church where Saul became Paul (Acts 9), we visited a craftsman shop to make some purchases of fine Syrian wood inlay boxes and lovely local fabrics and scarves. As we continued our walk back to the Presbyterian church, Steve commented about our security detail.

“There must be ten or twelve of them,” he said.

In front of us, behind us, bulky automatic weapons bulging from under their jackets, they had been with us the whole time. They had also been staying in the lobby of our hotel floor. Protection while we sleep.

And now I flash forward from Damascus to our trip back to Syria in November. We had another contingent of security with us as soon as we crossed the border. I was not so naive this time and grateful for their presence. I had the opportunity to talk to them and discovered that some of them had come from the city of Raqqa in Syria. Raqqa is now the capital or main city that ISIS controls. These men had lost family members there and their homes as well to this evil that is trying to drag their country back to the seventh century.

And there they were for us: protection while we sleep.

When we arrived in the Wadi al Nassara – the Christian valley of Syria – these troops handed us off to four men from Safita, all members of the national guard. They were with us for our remaining time in Yazdieh, Amar al Hasan and in Lattakia. Sweet, sweet men! The one named Tony held Marilyn’s hand through all our walking and hiking, to steady her as she was due for orthopedic surgery when we returned home.

Up and down the roads we traveled, through town after town on our way to the places on our schedule. Every town had pictures of those who had given their lives for their country, Syria, in this four-year old war. Poster after poster after poster would be at every intersection, in front of every business. And I am sure these men with us knew many of them. And I am sure that every one of those martyred soldiers had families that were missing them greatly, and who would share that same prayer: protection while we sleep. 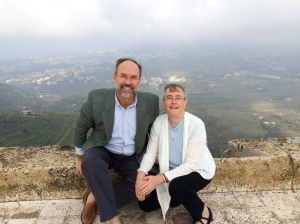 Steve and I on the top of the Krak de Chevaliers, Wadi al Nassara, Syria, November, 2014.

For four days and three nights, they were with us as we traveled through this beautiful place to meet with churches and refugees and families who had been driven out by ISIS from Homs and that part of the country. They went to church services with us. They ate dinner with us. They stood by while we traipsed through the world heritage site known as the Krak de Chevaliers, a former crusader castle in wars fought long ago. They told us how fanatic rebels had taken this high ground to fire on the Christians and others in the towns below. They told us how terrible things had been done to those captured, including throwing them from the high ramparts where we sat and had our photos snapped.

These four went with us everywhere for those four days, and were our protection while we slept.

On our last day there and before we left them behind, we gave them each an Arabic bible as a gift. All four are Christians, probably Greek Orthodox, and were thrilled to get the bibles and the little peace dove ornaments that we gave with them. 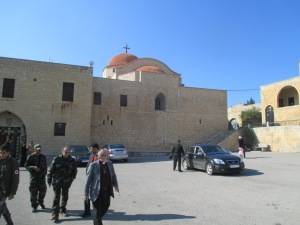 On the grounds of the St. George Monastery near Homs, Syria, with our national guardsmen. Sami is third from the left. God rest his soul.

When we arrived back in the U.S. we talked about what more we could do for them. Those four gentlemen were all serving in the National Guard of Syria, but their day jobs were just like us, maybe an engineer, a teacher, or some other normal job. They weren’t doing those paying jobs while they were with us. They were volunteering their time as members of their unit to protect us while we slept and while we worshiped and while we ate and while we climbed crusader castles and had our photos taken. And we wanted to do something for them.

So Nuhad wrote to their commanding officer to find out how we could give them a small monetary honorarium for our appreciation of their great service to us, and this was the response we got back:

What he asked instead is that we make a gift in their honor to support the 100 displaced families in Safita that their unit is responsible for.

No money for them, but money for the refugees that their unit is responsible for. That is what they wanted. No greater gift…

Today on Facebook, my friend Nuhad shared this picture of one them, Sami Sadeeh. He has lost his life in this war, in protection of his family and his country. I am sure there will be a poster of him on the roads of Safita, just like the others we saw.

And so now I pray for his family: protection while they sleep. 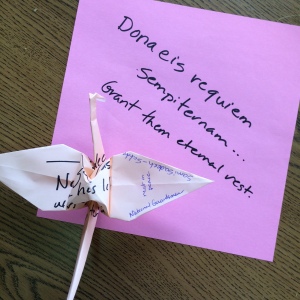 But my prayer for Sami is different and I wrote it on the 301st paper crane that I folded just today in his memory. It was not dona nobis pacem, for peace has been granted to him. Instead I used the words from that prayer used at a requiem mass, dona eis requiem sempiternam.

And I will sing “Blessings” on Sunday in worship, and when I sing the line, protection while we sleep, I will see Sami’s face, and know how that prayer was answered by God through Sami and all the others.