Iraq is a place with many people. They are Arab, Kurd, Turk. There are descendants from the African slave trade. They are Sunni, Shiite, Christian, Yazidi. Each of them is unique, as are we all. Each one made in the image of God and together making up the amazing spectrum of humanity. Can you imagine what the face of God looks like with each of us reflecting just a small piece of the whole?

There is also great diversity just in the Christians in Iraq. Those are the people I have gone to visit, to learn from, to encourage and to be encouraged by. There are Chaldean Catholics, Syrian Catholics, Armenian Orthodox, Syrian Orthodox, Protestants of several denominations including Presbyterian, plus others. There are churches there that go back to the beginning of the church, and they have lived with their Muslim neighbors since the founding of Islam in the seventh century. They have not always gotten along easily, but they have been neighbors and shared life together.

At one time, before the war we started in 2003, there were some 2,000,000 Christians in this ancient land of the church. That number had decreased to something like 600,000 since 2003. And they continue to leave due to sectarian violence, especially now from extremists who believe they have founded a new caliphate in Syria and Iraq.

The then 93-year old former Chaldean Archbishop of Kirkuk chants in Syriac inside the sanctuary of the Chaldean Catholic Church in Kirkuk. Msgr. Louis Sako is on the right. (Nov. 2012)

I have met a man named Louis Sako. When we first met he was the Chaldean Catholic Archbishop of Kirkuk. He has since been elevated as the Patriarch of this ancient church. He is a very learned man who speaks multiple languages, including Syriac, which is very close to the Aramaic that Jesus spoke. And he is a man of grace and peace, with a strong but quiet voice.

On this monument are the names of the martyred priests of the Chaldean Catholic Church since 2003.

Kirkuk. We shared coffee and sweets; always the hospitality of the Middle East is shared with visitors! We saw the grounds of his church compound, including the school where children were learning, playing and laughing, just like any school anywhere in the world. He took us into the sanctuary of the church where his 93-year old predecessor offered ancient hymns of worship in the ancient language of this ancient church. He took us to the roof of the school and cautioned us not to take photos. There were snipers in the upper floors of buildings nearby, perfectly willing to take out those who were pointing anything at them. He showed us the sign at the front of their grounds containing the names of priests of this church who had been martyred since 2003, evidence of their journey which has not been easy or cheap, and a reminder that when Jesus calls us to follow him, that road leads to the cross. 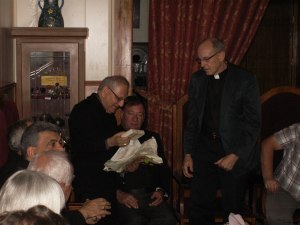 Msgr. Sako receives the cross from Rob Weingartner of The Outreach Foundation in Kirkuk, Iraq, November, 2012.

Back in his salon our leader presented him with a simple gift, a crystal cross. This symbol is the mark that we share as brothers and sisters in faith. No matter how we express that faith or what adjective we use to put in front of “Christian,” it is the cross that every one of us has in common. On the cross Jesus modeled for us what love costs.

And as Patriarch Sako opened it and accepted it he gave us these words: “It is fragile. Like our hope.”

The book of Hebrews tell us that “faith is being certain of what we hope for and sure of what we do not see.” Even when that hope is fragile.

2 thoughts on “A Fragile Hope”