“Dear Julie, I will miss you so much next year. I have enjoyed having you in chemistry and in my H.R. You are one of the very special students I have ever had at Westside. I wish you the best of everything in the future. Your Chem teacher, Mr. Crampton. Remember the Bartley Bomber.”

Not every teacher can teach chemistry. And not every chemistry teacher has the chemistry to teach. I had a chemistry teacher with both qualities. He made me, a person much more comfortable with nouns and verbs and adjectives, a confirmed non-thinking-especially-in-a-scientific-manner kind of student, actually enjoy and look forward to chemistry class. I understood what was going on! I worked for him and the chemistry team as a lab assistant for two years, following in the footsteps of my much brighter and more scientifically inclined sister Jana. My sister Susan followed me into the same position in the lab.

His name is Ron Crampton.

I have the most wonderful memories of my years in school in District 66 and love it when I come across my teachers on Facebook to let them know the impact they had on my life. Whether in the English department, the German department, math or science, they gave me the desire to always learn; to ask questions; to tell the stories that come from life. I wish every student, past, present and future, could have teachers like I have had.

Working for and learning from Ron was a joy. Those two years in the chem lab as an assistant I worked alongside my best friend, Sharon Uhrich, now Heimes. We ran the water distiller, filling hundreds and hundreds of five-gallon bottles. We mixed solutions. We set up trays for experiments. We typed stencils and then ran off reams and reams of worksheets and exams. We washed billions and billions of beakers and flasks and eye dropper bottles of reagents. We organized and alphabetized chemicals.

We created The Phantom!

Mr. Crampton indulged our every whim in that lab for those two years. As we finished advanced biochemistry in our senior year, he kept us on to monitor test-taking in his other chemistry classes. He trusted us and he laughed with us at our phantom antics. 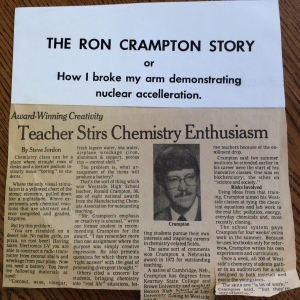 Mr. Crampton was a chemistry teacher who would do anything to get you to understand a concept. Along with Dr. Flub (Louie Niemann) he would make chemistry large group in the auditorium into a production. As Dr. Flub explained the way a nuclear accelerator worked by speeding up atoms so they could crash into each other, knocking nuclei together to release their protons to form new elements, Mr. Crampton, dressed in white lab coat with a toilet plunger in his hands like a knight’s lance, ran at full speed down the aisle and flipped into the orchestra pit, breaking his arm. It was legendary! Chemistry at its finest!

We graduated in 1977, and I still have a clip from the Omaha World-Herald extolling the teaching virtues of this educational virtuoso. Sharon and I added our own headline to the story for our classmates. 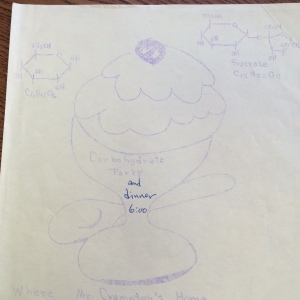 This was Ron Crampton. Every semester after the advanced biochem class ended, he would invite those who had taken the class over to his home for a “carbohydrate” party. Dinner was served picnic style by Ron and his wife Meri, and was followed by his own homemade ice cream. Ice cream turned in a hand-cranked freezer was just another way to show us the practical ways chemistry was a part of our lives. Adding salt to water creates an endothermic reaction – one that requires energy for the salt to dissolve in the water. This natural lowering of the temperature in the system, along with the rotation of the freezer, makes ice crystals form in the milk-egg-sugar solution inside the canister, moving it from a liquid form to the tasty frozen treat served in bowls with toppings.

He went on to win multiple awards for his teaching at the local, state and even national levels.

He knocked on my door last night. 38 years after graduating from Westside High School we are still friends. He even came to my wedding in 2002! He tends the gardens at the church two doors north of my house and they are blooming in glory right now in this April spring. Retired from teaching since 2001, he is a master gardener.

He also tends the flower beds at a local historic landmark, the Joslyn Castle. He was there last evening doing his thing and noticed there was an event going on, so being the curious scientific type, he investigated. Inside there was a book-signing going on for a new children’s book, The Oracle’s Fables, about Warren Buffett, our local billionaire. Ron noticed the author’s name was John Prescott, so he continued his investigation and discovered that John is the cousin of his three former lab assistant sisters: Jana, Susan and me. That conversation led to John explaining that our other sister Sally (never served as lab assistant, but he certainly had her as a student) was also a published author, just releasing her second book. (Both of Sally Gerard’s books, Windows in the Loft and Worthy of Love are available on Amazon. Shameless plug. 🙂 )

And that is why Ron was on my doorstep last night. He had come to share his joy at having had such amazing students in his classroom all those years ago. We hugged and laughed. I showed him Jana’s new digs coming to completion in the addition to our house. Just friends. Not teacher and student anymore, just friends.

He has a teaching chemistry. Combine knowledge of a subject and a creative way of imparting it and it creates exothermic, energy-producing, reactions. His classroom antics and inspiration are seen in the lives of his students decades later. Peace and hunger activists. Environmental activists. World travelers. Authors.

He signed my senior yearbook under his faculty picture that year. It’s at the top of this post. “I wish you the best in everything in the future,” he wrote 38 years ago.

A wish that has come true, and not because of magic thinking.

A wish come true because of teaching chemistry.