TOF team outside of NEST

It is the end of our first day on this trip to Lebanon and Syria with The Outreach Foundation. I am tasked with encapsulating it for you at home, and so I have taken good notes through our visits on this Friday in Beirut. But as usually happens, the threads of the day all come together into a whole cloth of beauty and truth when someone brings the word to us in a team devotion. Tonight that was Marilyn, our fearless and faithful leader, who gave us the words of Paul (which he gave to the church at Philippi) and the title of this blog.

The words are appropriate for this group of American Presbyterians as we wait in hope for our visas into Syria next week. We will see many hard things. We will hear many hard things. We will wonder where to find hope in a land that is in its seventh year of war. Most of those on this team have experienced it before on other trips to Syria, but some have not. The seeing before does not make the seeing now easier, as those pictures are easily drawn to the front of our brains and we know the names of the people who are the subjects and objects of those stories. Lisa put it very well tonight: they are just like me. But Marilyn’s – and Paul’s – caution is to think on what is good, what is true, what is honorable, what is just and pure and pleasing and commendable. That is quite a list of words to keep in mind, so let us concentrate on the good. I will get to the title later!

Our program visits today were to two of the special partners of TOF in Beirut: the Near East School of Theology (NEST) and the offices of the National Evangelical Synod of Syria and Lebanon (NESSL). To sit with Dr. George Sabra, the leader of NEST, is always like being a part of the best class experience ever. He speaks softly, and is always willing to give the numerical facts of this theological institution – how old it is, how many students, how many faculty – but then will give you the meat of what this place means to the life and vitality of the reformed churches in Lebanon and Syria. For example, to celebrate the 85th anniversary of NEST this past November, NEST published the culmination of a multi-year project to translate John Calvin’s 16th century Institutes of Christian Religion into Arabic. It’s a book for scholars, not the every day reader, so why bother? What do 500-year-old words have to do with today? But then this educator goes on to remind us that Calvin wrote those words in a time when this new reformed faith of ours and the churches which professed it were under great oppression themselves. These words have importance in a 21st century context for Christians in the Middle East and so it was very worthwhile.

We also spent time with Rev. Joseph Kassab, general secretary of NESSL, and an esteemed group of Synod leaders, including Rev. Suhail Saoud, secretary of the Synod’s Committee on Social and Medical Services. Before the crisis in Syria, this committee was a minor committee of the Synod, but since the crisis began in 2011, its mission and ministry have increased exponentially. We have heard about the growth of a project dear to many of our hearts, the five – now six! – schools for Syrian refugee children. A sixth school was recently opened in Anjar, an Armenian area not far from Beirut that already serves 230 students in two shifts. Forty-five teachers in six schools are educating 600 students age 4-11 in English, Arabic, science and math in the Syrian system in the hope that when they can return home they will be ready to continue their education at grade level. These children and their families, almost all living in tents in camps, are cared for with the love of Christ. Rev. Suheil shared the words of one family: “This is the first time we have felt like humans.”

These institutions have interesting challenges. For NESSL, it is coming to the conclusion that the church needs to get outside its walls; it cannot be an insular community. Projects like the refugee schools give the opportunity to daily touch the lives of refugees, nearly all Muslim, with the love of Christ. For NEST, one of those challenges is walking alongside their Syrian students and preparing them for future ministry in the east, in Syria, where the need is great for church leaders. I was reminded of the importance of that leadership as I took the picture of the plaque which represented the class of 1997. Three of those names go with faces I know well who perfectly represent the fact the NEST and NESSL are meeting those challenges. Rev. Tony Aboud is the pastor of the church in Kerbet Khanafar in the Bekaa Valley of Lebanon. His wife Ramak is the principal of the refugee school in Kab Elias. Together this ministry couple and their team touch the lives of sixty-plus students and their families daily. Rev. Rola Sleiman, pastor of the church in Tripoli in the north of Lebanon, is the spiritual leader of a large Synod school there as well as another of the refugee schools. She is also the first woman ordained to the pastorate of a Presbyterian church in the Middle East. Rev. Ibrahim Nsier is the pastor in Aleppo, Syria, a church that volumes can be written about the infinite ways they have served faithfully through the destruction of war. You will hear more about that church and others in the coming posts.

And that takes me back to the title of this post. Belmarouf is a word repeated in an old Syrian love song, which came to the mind of another pastor in Aleppo as he contemplated the destruction of his city. “Oh, how wildly I long for you; how cleaved is my soul to you! I am fully yours, belmarouf (with unconditional goodness). With patience, I will get what I am looking for belmarouf (with your unconditional goodness.” Out of the rape of war, “the new born will heal the wounds of many and will disturb others belmarouf, with goodness and justice.”

As we prepare to see what he has seen, and hear the stories of those who walked those days, we too will think on what is good and just, and remember that it is the people we met at NEST and NESSL who remind us that we have much material to work with. 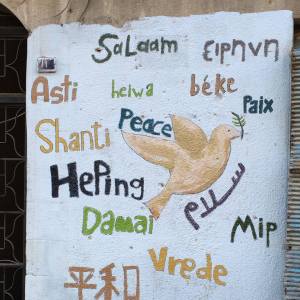 I am now officially a graduate student in the Master of Arts in Ministry program at Creighton University here in Omaha. I have spent two weeks with the other members of my program in resident classes there in June. What a joy to meet face-to-face with these wonderful young people! Most of our class time together will be spent online, discussing in Facebook-like posts on what we are reading about, so be together in the classroom was great fun.

During the weekend that came between the two weeks, twelve of us spent time together in an Ignatian silent retreat led by one of the Jesuits from the Creighton community. Father Larry Gillick guided us through those hours of silence with scripture to pray on, stories to think on and the reminder that our identity is found in what we receive from God and not in what we achieve on our own or what the world tells us we are.

A silent retreat. I survived. And yet I still have to make it through an eight-day silent retreat to fulfull the requirements of the class. EIGHT DAYS! Please pray for me. 🙂

I think back on the wonder of that weekend on this day as I prepare to leave once again for Lebanon. I will be spending precious time with sisters in Christ, many of them from Syria. I think how the luxury of quiet would be to them in the days of war they continue to walk through. I think they would love to hear…

One of the best things Father Larry gave me on this retreat was a name: Gerard Manley Hopkins, S.J. Father Larry would bring a well-worn Braille book of poetry with him when he came to our gatherings to direct us. The poetry was all by Gerard Hopkins, a Jesuit and poet from the nineteenth century, who had a way with language that brings me to tears. As we were meeting in the library of the retreat center for these meetings, I investigated the card catalog for some of Fr. Hopkins’ work. Surely in the Jesuit library in the Jesuit retreat center I would find a book of Jesuit poetry…

I was not disappointed.

In my quiet time (there was a lot!) I thumbed through the book and found this waiting for me like a gift under the Christmas tree:

When will you ever, Peace, wild wood dove, shy wings shut,
Your round me roaming end, and under be my boughs?
When, when, Peace, will you, Peace? I’ll not play hypocrite
To my own heart: I yield you do come sometimes; but
That piecemeal peace is poor peace. What pure peace allows
Alarms of wars, the daunting wars, the death of it?

O surely, reaving Peace, my Lord should leave in lieu
Some good! And so he does leave Patience exquisite,
That plumes to Peace thereafter. And when Peace here does house
He comes with work to do, he does not come to coo,
He comes to brood and sit.

“He comes with work to do.”

There it was. The peace I have been praying for, and continue to, requires work. It is not going to just sit there and say, “Here I am! All is quiet now.” It is the beginning of work and not an end. We have work to do to make peace and keep peace.

And so I go to be with those who are peacemakers and peacekeepers. And they are blessed. Says so in Matthew 5:9, you can look it up.

Just as Fr. Larry introduced me to Fr. Hopkins and his beautiful poetry and this special one about peace, he also gave me a scripture to contemplate which describes the work I am to do, and you can too if you want to join me in working for peace: