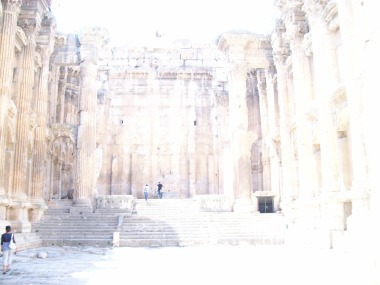 Beirut, Lebanon, is a fascinating city. There are places we have found to visit once that draw us back again and again. One of those is the Sursock Museum. It was once the home of the Sursock family (funny how they named it after them…) and is a grand old three-story Lebanese home, now filled with modern art. Mr. Sursock and his family were great patrons of encouraging and collecting modern art and every time we come there is a new display. This trip was no different. I have encountered two rooms that are my favorites. One usually has a great collection of old photos, much older than the rest of the art in the place. On Friday, there were late 19th and early 20th century sepia photos of Baalbek, a place I visited in 2010. The color quality of the old photos seemed to match my 2010 versions; the sun was so bright the day I was there that any color simply washed away in its brightness, sacrificed as it were in the Temple to the Sun. The other room is a beautiful old salon with benches that curve around a small fountain. You can just imagine sitting there with a good book and wiling away the hours escaping that same sun on a hot summer day. 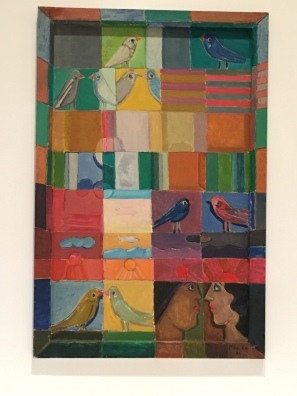 After I scanned the Baalbek photos and poked my head into the salon, I walked a bit farther down the corridor and came across this painting. It is called Encounter and it is by Amine al Bacha, the artist whose work was the feature display of the Sursock. I was entranced by the face-to-face encounters he depicted. Except for the one pair of humans, they are all birds, which I found to be kind of whimsical, as I don’t think I have ever seen birds gaze into each other’s eyes. I noticed that in some of the blocks of the painting they were farther apart and some closer together. They are even touching beaks in one block. They are encountering each other, maybe for the first time, or maybe for the second or third. And I love how the distance closes.

This is how I have experienced my own encounters as I have traveled in these places. The first time in 2010, I encountered new people from a distance. I encountered my roommate, my team members, the church people we met, first in shy conversations and then near the end in nose-to-nose embraces. We encountered each other in those spaces and drew closer to one another in deep relationships. That first roommate is now my dear friend and sister, Barbara Exley. Those team members are faithful women who have gathered me in by Facetime to pray with me over my continued travels. Our faithful leader and my now mentor and friend Marilyn Borst, along with The Outreach Foundation, have enabled me to encounter the churches in Lebanon, Syria and Iraq in ways that help me understand that the body of Christ is much bigger than my church in Omaha, Nebraska. In their midst, I have encountered Emmanuel – God-with-us – who closes the gap between us that our sin and failings create. 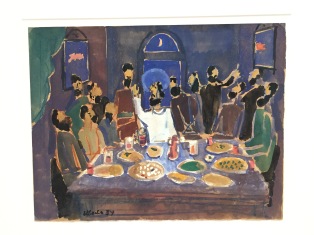 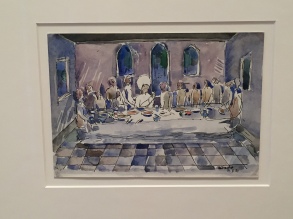 Past the painting of encounter, I discovered a series of paintings Mr. al Bacha did of the last supper, a meal we celebrate and remember every time we have communion. We encounter that same Jesus in the bread broken and the cup raised. That is the place where the gap is closed. And we all are invited to the table to encounter our brokenness and his sacrifice that forgives and heals and redeems us. It was fitting today that in Tripoli, Lebanon, we encountered him again. The words were in Arabic, but the breaking of the bread and the raised cup are universal. He drew us to each other as we shared the elements, and we were all drawn closer to him. 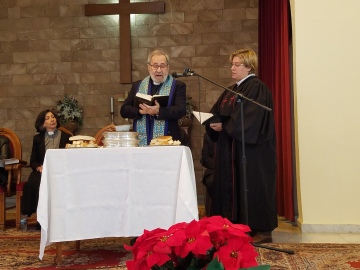 Whether for the first time, or the second, or the thirteenth, I remain grateful for these encounters and the opportunity to meet Jesus face to face. 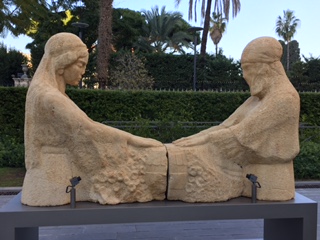 Standing outside the Nicholas Sursock Museum in Beirut is “The Weeping Women.” This sculpture depicts two women, one Christian and one Muslim, mourning together in the loss of sons to senseless wars.

I find myself once again in a place that has become so close to my heart. When I return to Lebanon and Syria it is like coming to a second home, and I think that is pretty amazing for someone who has lived her whole life in Omaha, Nebraska! But on a January day in this new year of 2017, I have returned to Beirut, and from here I will travel on into Syria to places I have been before in a time of peace and in this time of war.

From our first appointment on Friday to our last cultural experience at the Beirut National Museum, my mind kept focusing on the contrasts.

We spent the morning visiting the Our Lady Dispensary, a partner of The Outreach Foundation, a Presbyterian mission-connecting agency that I have traveled with. OLD is run by a real life angel named Grace Boustani. Well named, she exudes grace and gives glory to God for placing her right where her sweet spot is: serving in his name. OLD provides social and medical services to thousands of refugees from Syria and Iraq who find their way to this poor mostly Christian neighborhood in Beirut. Grace herself grew up in the Lebanese civil war (1975-1990). She and her family left for a time, but she returned as a social worker to bring healing to her country. She uses that same touch with every person who walks through the door at OLD, Monday through Friday. 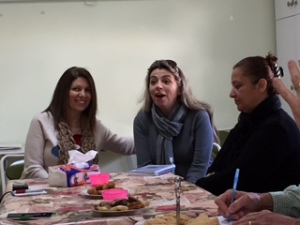 Grace and Rula of Our Lady Dispensary in Beirut are the smiling presence for refugees of wars in Iraq and Syria.

Today we had the opportunity to hear three very personal stories from three women who fled the Mosul area of Iraq in 2014 when ISIS moved in. Hala, Ramzeh and Wafa each had similar stories, but to hear them each tell their own experience was a reminder that everyone who has been affected by the happenings in the Middle East since we first invaded Iraq in 2003 has an individual story to tell. We owe it to them to hear them, see them as real people with real families. They have names! And now, we know them and can put faces to those names.

They each told of fleeing in the middle of the night. “Leave now or you will be killed! Take nothing with you! Just go!” Taking nothing but the clothes on their backs, they each left with their husbands and children, walking the fifty-plus miles from Mosul to Erbil. In Erbil, they lived in a refugee camp located in the open-air courtyard of a church there. Months later, living in extreme conditions, they made their way to Beirut and the neighborhood of OLD. They told of leaving everything behind. Former neighbors sent them photos of their homes burned to the ground by ISIS. Family graves were dug up in the Mosul cemeteries and the remains of the family members were strewn around to leave no trace of their existence. Two years later, they are all trying to be resettled in other places by the UN, but the lists are long, resources few, and the list of countries willing to take refugees from Iraq and Syria is shrinking.

It sounds hopeless, but at OLD they have found caring hearts and listening ears. Hala, Ramzeh and Wafa have each been through the trauma healing ministry led by Roula al Kattar, and have been able to talk through their grief, forgive their trespassers, and be reminded that the God they have known all their lives is still with them. It was a humbling experience to meet these three women and share the morning with them, tears and all.

The contrast came later in the day as we made our way to two museums. The first is housed in an old Beirut mansion that is filled with contemporary art. Works by people whose names are written down and celebrated are displayed in home that once was a gathering place for a wealthy family. The Sursock Museum is indeed a treasure; their belongings are well displayed and preserved, unlike the former possessions and now burned down houses of Hala, Ramzeh and Wafa. 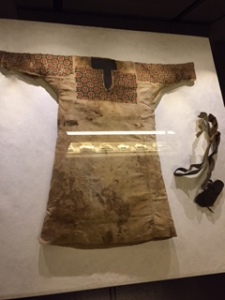 In the Beirut National Museum, well restored since the civil war, we visited the newly reopened lower level where we saw well-preserved mummies, a child’s garment from the 13th century, and a long line of beautiful sarcophagi. There were steles engraved with the names of the long dead. And yet, there were the names of someone’s ancestors. There were the preserved remains of ancient people on display for those of us walking in this century to see and marvel at. There was the evidence of lives lived in specific places.

There was and will be no evidence of the life lived in Mosul by Hala, Ramzeh and Wafa, or their families. The only memory for them is what is in and on their hearts that they shared with us. And so we will be their museum, holding onto these treasures. May God grant them new lives and new homes to make new memories in the days to come. May they continue to process their grief and call on the Lord who knows all our names. May they find restoration and peace. 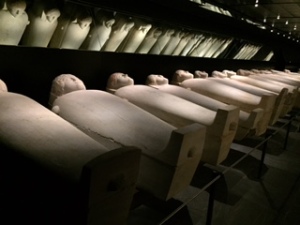 Sarcophagi lined up in the Beirut National Museum