I had a great week with the Pope last week. He was in Washington, D.C., New York and Philadelphia. And I was home in Omaha. But, oh the magic of television! I watched him speak to Congress and to the United Nations and to school children in Spanish Harlem. I watched him lead masses in all three cities. I prayed the Lord’s Prayer with him – me in English and him in Spanish. I thought of my first communion as he broke the bread and lifted the cup. It was a great week.

He came to the U.S. for his first time for many reasons, but foremost among them was to celebrate the family. And in his celebration, I decided to celebrate mine, too.

We’re not the family of Father Knows Best or Ozzie and Harriet, or even The Brady Bunch or The Partridge Family. Although we do love to sing and several of my dad’s cars resembled a bus.

But we are a family, and it has expanded and contracted over the years like every family, through marriages and births and deaths and divorces.

This is my family as it looked on the day I married Steve: 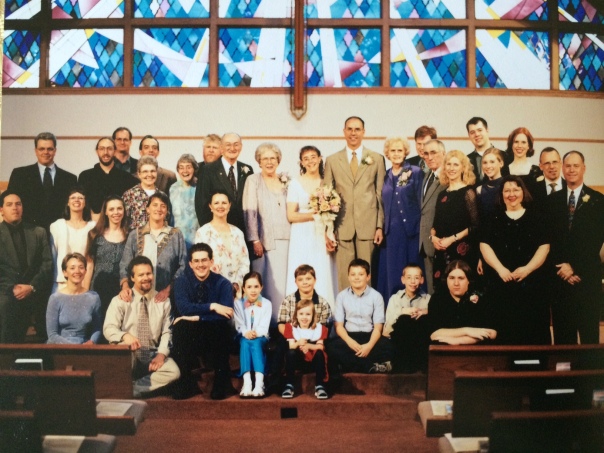 The now great big expansive Prescott-Burgess clan. I love this picture! May 18, 2002. Five of my six siblings, their spouses, my three step-siblings and their spouses, Steve’s brother and sister and their spouses, my dad, my step-mom, Steve’s parents, and our assorted nieces and nephews and one very special aunt, filled the chancel at West Hills Church. This big group was newly tied together as two 43-year olds said “I do” to each other.

Tied together in holy matrimony; two families become one.

In the thirteen and a half years since that picture was taken, there have been shared joys and shared sorrows, additions and subtractions.

All of those nieces and nephews pictured have graduated from high school and/or college. Some have even achieved post-graduate degrees.

There are more members now because four babies have been added.

There have been divorces in that group as well, but there have been weddings, too. And another one coming next February, will add a new brother-in-law.

Death has claimed my dad and Steve’s just one month apart in 2007, and my step-mom died just a few short weeks ago.

I see how straight Jana is standing in that photo, and it makes me sad to know that she can’t stand like that any more. Age and disability have caused her to hunch over and appear much older than her 57 years.

But what I love most about the picture is that it is on the church chancel, right under the cross.

That is where this atypical family finds strength to deal with the loss and the pain and the grief.

That is where this atypical family is tied together in joy when the babies come and the weddings are celebrated.

That is where we go when crisis comes. And crisis does come, as it has this weekend. And in a hospital room we gathered around a bed, in prayer to the One who ties us together, the One who holds us together when forces would pull us apart.

Where two or three or how ever many are there gathered in His name, He is there with us.

And the beauty of technological creation, that same thing that allowed me to be with the Pope last week, allows us to join together in prayer, seeking solace from one another, even when we are spread around the country. Email. Texting. FaceTime. Telephone.

Praise God from whom all blessings flow. Blest be the tie that binds.