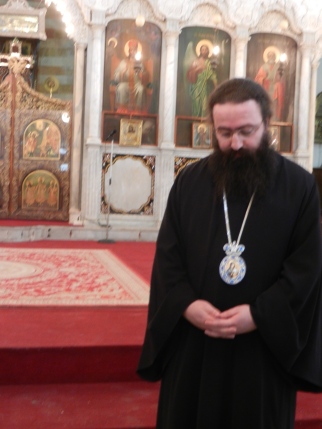 A Greek Orthodox priest in the patriarchate, Damascus, Syria, Jan. 2014

I have been able to visit the ancient city of Damascus twice. The first time was in August, 2010, when I traveled with eight other women from the Presbyterian Church U.S.A. with the Outreach Foundation. (https://jpburgess.wordpress.com/2014/08/04/faithful-women/) It is an amazing city! We saw the sights and met the people who lived there in peace. One of the many we met was a woman named Colette Khoury. An author in her own right, Madame Khoury is the granddaughter of Faris Khoury, a former prime minister of Syria (the only Christian to ever be so) and a founder of the United Nations.

This is me and Colette Khoury, in her Damascus apartment on a hot day in August, 2010.

We met so many wonderful people there, including those in the Presbyterian Church in Damascus.

In January, 2014, Steve and I were back in Damascus to encourage those brothers and sisters in the Damascus Church. We experienced amazing worship and fellowship and I think we shook hands and/or hugged everyone in that congregation, grown larger because of the refugees from the war in that city.

The differences in three and a half years were very apparent to me as we walked through the Christian quarter. The little Ananias Church is still there at the end of the alley off the street called Straight. It’s the place where Saul was baptized and renamed Paul. You can read about it in Acts chapter 11. What’s different is that many of the shops are closed because there is no tourist traffic there anymore. I wrote about it here: 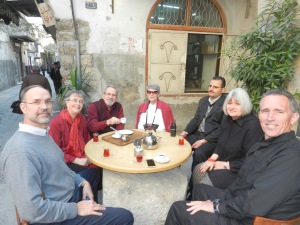 Coffee and tea outside a shop in the Street called Straight, Damascus, Syria, Jan. 2014. The street was quiet except for the mortars we heard.

Another change was in the sounds I heard. Yes, there were still honking horns and the call to prayer from multiple mosques, but there were also explosions from mortars falling near the city. “Welcome!”, the head of our security contingent said. Sadly, the people who live there have become accustomed to it.

One of the most wonderful sounds we heard was the sound of Greek Orthodox priests singing ancient texts in a church that dates to the third century, their voices resonating off the stone walls and floors. The only word I have to describe the sound is heavenly.

There was a symphony of sound all around us in those precious three days. And it pulled these words out of me:

Damascus just like every place has its notes and sounds
When you walk along its streets it totally surrounds
The honking horns of cars and cabs
The clack where cobblestone meets heel
Yella, yella, come here quickly!
Schweih, schweih, slow down! Tires squeal.

There are sounds that call five times a day
For the faithful to bow down in prayer
From loudspeakers perched on minarets slender
It comes from everywhere.

Other directors have added percussion
That we could not help but hear
Guns and mortars lobbed in anger
Causing some tremors of fear.

My prayer for this land of music so fine
Is that the orchestra gathered
Will remain in place for centuries still
That all will remember it mattered
That it takes the percussion, the woodwinds, the brass
It takes the family of strings
It takes everyone working together for peace
Each one of us, together, should sing!
God made us all, each one to reflect
Uniquely the range of his glory
Let our voices and lives blend harmoniously now
To continue his musical story.