You asked me twice why I go to Lebanon and Syria and Iraq, and in my own ineloquent way I tried to answer. In flying off to those lands today I took a book from my shelf of unread books to accompany me on this journey. Mystics was written by Fr. William Harmless, S.J., a former theology professor at Creighton, now deceased. First of all his name is a reminder to do just that: harm less. How could I not take it to a war zone?

Studying the mystics is part of my master of arts in ministry program at Creighton and I spent part of the summer and fall in the readings of Julian of Norwich, Catherine of Siena, Alice of Foligno and others including men. But I didn’t quite grasp the meaning of mysticism in the sense of Christianity until I weirdly grabbed this book at four this morning on my way out the door.

A 15th century theologian named Jean Gerson offered a definition that was very helpful to me as a strong feeler on the thinking-feeling spectrum of the Myers Briggs assessment. “Where scholastic theology focused on the mind, mystical theology sprang primarily from the heart, the affectus.” (Pg. 6 – I love that, affectus…affect us…touch our heart!) “…the way he says that mystical theology offers a knowledge of God that comes from love.”

And Fr. Harmless used this wonderful analogy of marriage to explain that, words that were so life-giving to me this morning that I texted them to Steve, a man who shows me God’s face every day:

After that text I emailed Wendy Wright, my theology professor who introduced me to the mystics as part of our coursework, I was so grateful!

(I am getting to why I go, by the way, it just has to run its course through the journey I have had with this book this morning. That’s what I do best. Blather.)

So as I was contemplating love-wrought knowledge and “the embrace of unitive love,” (as Gerson put it, that whole affectus thing) Fr. Harmless began with a chapter on a modern mystic, Thomas Merton, a man who converted to Catholicism during college and eventually became a Trappist (of the Benedictine tradition) monk and priest. He was a prolific writer (and now I need to get some more books…), but Fr. Harmless quoted from one in particular, Conjectures of a Guilty Bystander. The title of the book alone might be a partial description of why I went the first time. But it was the quotation that said, “Julie, here are the words you needed to say to Tom. Get to Houston and write him!”

From a man who had decided the world we live in was a place to escape from, came this:

In Louisville, at the corner of Fourth and Walnut, in the center of the shopping district, I was suddenly overwhelmed with the realization that I loved all these people, and they were mine and I theirs, that we could not be alien to one another even though we were total strangers. It was like waking from a dream of separateness, of spurious self-isolation in a special world, the world of renunciation and supposed holiness. The whole illusion of a separate holy existence in a dream. Not that I question the reality of my vocation, or of my monastic life; but the conception of “separation from the world” that we have in the monastery too easily presents itself as a complete illusion: the illusion that by making vows we become a different species of being…And I suppose my happiness could have taken form in the words: “Thank God, thank God that I am like other men, that I am only a man among others.” … It is a glorious destiny to be a member of the human race, though it is a race dedicated to many absurdities and one which makes many terrible mistakes; yet, with all that, God Himself gloried in becoming a member of the human race. (30-31)

He went on and it just got better:

A member of the human race! To think that such a commonplace realization should suddenly seem like news that one holds the winning ticket in a cosmic sweepstakes. I have the immense joy of being man, a member of a race in which God Himself became incarnate…There are no strangers!

Here it comes, this is what I tried in my own feeble, stumbling words to say to you about why I go:

Then it was as if I suddenly saw the secret beauty of their hearts, the depths of their hearts [affectus!] where neither sin nor desire nor self-knowledge can reach, the core of their reality, the person that each one is in God’s eyes. If only they could all see themselves as they really are. If only we could see each other that way all the time. There would be no more war, no more hatred, no more cruelty, no more greed… (31) 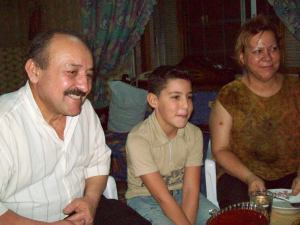 It was on that first trip back in 2010, as I told you. We were in Aleppo, invited into the home and to the dinner table of the Aziz family, displaced to Syria from Iraq by our war. We could see the depth of pain in their manner, in their eyes, in their reduced circumstances. Where there should have been hatred and shunning directed at their American visitors, there was an invitation to the table, the table of grace. The Lord’s table.

And that is why I go. My eyes have been opened to see the other, to see me, to see us all as we really are: Beloved children of God.

Affectus. Let it affect us. It has affected me.

Thanks be to God.