Beyond this, there is a desire for immediacy sustained by consumerism (and reinforced by aspects of information technology) that tends to encourage a memory-less culture without a sense of historical identity. – Philip F. Sheldrake (The Blackwell Companion to Christian Spirituality, chapter 26, page 461, edited by Arthur Holder, Blackwell Publishing, 2005)

In preparation for the journey ahead into the Masters of Arts in Ministry program at Creighton University which begins next week, I am reading some materials assigned by a professor to get ready to dive into the study of Christian spirituality through ancient writings of monks and martyrs. The quote above struck me as I thought back on a quick trip to Dubuque, Iowa, last week to visit my Aunt Carolyn, a 60-year member of the Sisters of Saint Francis of the Holy Family. 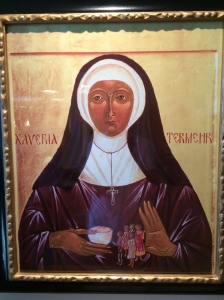 Jana and I spent two nights and three meals with the sisters of this order. As opposed to an environment of the “immediacy sustained by consumerism,” we found ourselves in a place of a long vision forward sustained by faith. We met so many of these living saints now retired – if that is a word that can be associated with those whose calling is eternal – in the motherhouse of this order founded in the 1870s in Germany. Foundress Sister Xaveria Termehr is interred in the same cemetery as my grandmother Bea Thirtle, under a plain headstone and surrounded by others like it of her daughter-sisters who followed her into this order and lived their lives in service to God’s kingdom.

It is not an ancient order like those whose words I will read in my theology class, but as I learned in my short visit with heart open to their story, it is a servant group of women who have been called into it. Aunt Carolyn gave me her histories so I could read up on them in the days to come.

They are a Franciscan order after Saints Francis and Clare of Assisi. The images of these two are everywhere in the house and also in the close-by Shalom Spirituality Center which was the original Mount Saint Francis motherhouse. When I was a little girl and first visited my aunt as she was then known, Sr. Mary Edith Ann, they wore brown habits like Francis. Their mission statement was framed on the wall: Rooted in the Gospel and in the spirit of Francis and Clare, the Sisters of St. Francis live in right relationship with all creation. The culture of their patron saint is a living witness to those walking today.

They have founded schools and hospitals and elderly homes. They have served the immigrant in a new land both in Germany where they started and here where they have been planted since crossing the sea. They build wells in Africa. They have had a presence in China and the east. And in all those places and to this day, these sisters in Christ have served tirelessly and selflessly those in need of healing and resting and learning. Those with gifts of administration have led the institutions they built.

We went to a now-closed church in Dubuque, Saint Mary’s, which once had an active school, a convent for the sisters and of course, the church. In hand I carried an old black and white photo taken in 1962. There is Aunt Carolyn in her pre-Vatican II habit, my mom Jeanne (holding the hand of an unseen sibling that I believe is Susan) and their mom Bea, my grandmother. They are standing on the playground between the convent and the church. We decided to recreate the photo in the same spot (no more fence or playground equipment) with the same house in the background as the 1962 picture. As we were trying to figure out how to take it, a young woman came up to see what we were doing. It turns out she is a resident in the old convent, now known as Maria House. The building that once housed the sisters like my aunt, is now a home for women coming out of the prison of addiction. This woman was eager to tell us her story. Caught in the cycle of alcoholism by parents of brokenness, she has not had custody of her children for years. But with the help of this project of the Franciscans, she is clean and sober and about to get her children on a five-day-per-week basis. And then she will transition into the new apartments next door: the former school where Aunt Carolyn spent her early years teaching.

We saw how resourceful this group of nuns has been in the years since they began these ministries. A hospital built in the 1940s is now an apartment building. Saint Mary’s Church is being turned into a neighborhood center for small offices and gatherings. The school will be a longer-term residence for those women being freed from the bondage of addiction. These women who took vows of poverty, chastity and obedience, have lived into those vows by pouring into the lives of others.

We couldn’t go anywhere in Dubuque without someone coming up to Aunt Carolyn to say hello. Either she taught them as children in school or preschool or daycare, or had cared for their aging parents at the Stonehill facility where they lived or rehabbed. They all knew her. And I imagine that other sisters are known in the community in the same way.

We closed our visit with a short trip to the Clare House dining room of Mount Saint Francis. In this new long-term residence for the elderly and infirm sisters, there is a beautiful depiction of the last supper done in intarsia by a very talented sister-artist. In this three-dimensional picture of the table of community we find Jesus and his apostles. Not just the ones you know were there like John and Peter, but others whose lives speak to the history and tradition of Francis and Clare, those who served and advocated for the poor and unheard. There is Martin Luther King and Dorothy Day. There is Oscar Romero. And there is Mother Xaveria Termehr. She is seated at the table with Jesus, and even this evening her daughters will be gathered to pray before they share their common table. A tradition that continues under the eyes of a community and communion of saints.

I claim as my own now their sense of historical identity, even as their order now diminishes in size. Through my Aunt Carolyn I will carry the stories she shared with us in those precious hours. As I read the history books she left with me and read the stories of the saints in my theology class, I will be sustained and encouraged by the culture of this way of life. The religious orders may not look in the future like they looked in the past, but as long as I – we – remember, their traditions will carry on.