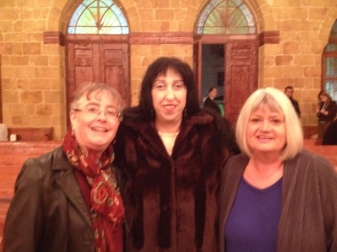 Traveling to the Middle East has been a life-changing experience for me. I have gone to Lebanon, Syria and Iraq a total of seven times since August, 2010, when I traveled for the first time with The Outreach Foundation and my new friend, Marilyn Borst. I have gained more friends on those trips that I am so grateful to be connected with by email and Facebook. And, of course, reuniting with them when I return.

Back on that first trip in August, 2010, I traveled with a group of women – faithful women – as the trip was called. They were all veterans of short-term mission trips to places all over the world. They had been to Cuba, Russia, Malawi, Pakistan, North Korea, Israel/Palestine, Iraq, Lebanon, Syria…and many many more places. I had been to Germany, the Czech Republic and Cameroon on similar trips. But this one was new for all of us, except Marilyn of course.

We were traveling to be connected with Presbyterians (like us!) in Lebanon and Syria in the National Evangelical Synod of Syria and Lebanon (NESSL). We got a great overview of the history of the Synod: how Presbyterians from the U.S. came to the Middle East to convert Muslims and Jews to Christianity. Upon arriving, they found no Jews to speak of and also there was this small thing about it being illegal to convert from Islam to something else. Illegal as in the death penalty.

Instead, they reached out to the ancient Christian community already there – Melkites and Maronites and Syrian, Orthodox and Catholic – and built schools and hospitals. The reformed church was planted alongside the ancient, and that is how it still is today.

We visited historic sites in both countries. We shopped in souks. We met with Iraqi refugee families. We visited schools. We sweltered in the 115 degree summer heat.

We bonded as a community of friends, sisters in Christ.

We ended that trip in the mountains above Beirut at the Dhour Choieur Conference Center to be part of a women’s conference, just like we would have at home, only in Arabic. (They translated for us.) We sang worship songs. We delved into a Bible study about the fruit of the spirit led by my new friend Barbara Exley from Atlanta. She had brought pounds and pounds of Jelly Belly jelly beans in flavors to represent the fruits. For instance, watermelon jelly beans represented patience. It was the most joyful and sweet-filled Bible study ever!

Part of the grace of being in the Middle East is the mindset of hospitality and gift-giving, and it played out at this conference just like every other place. We made friends with women. We traded little gifts. If you admired someone’s bracelet or earrings, she would immediately remove the item and give it to you. Amazing grace in the form of jewelry.

And that is how I met Lamis Bitar from Lattakia.

She was tall, statuesque actually, with beautiful dark hair and eyes. Her smile came slowly, but when it did it was genuine. She and I became friends on that weekend and in the generosity of these people, she bestowed upon me the earrings she was wearing.

And then the conference ended and we made plans to do it again in 2011, with even more women, perhaps from Iraq. And we went back home to the USA.

And then March, 2011, came and war erupted in Syria. There would be no women’s conference in Syria, and we would not return in 2011.

I would wear those earrings at home. Precious they were to me. Every time I put them in my ears I would think of the fun we had at that Bible study with the Jelly Bellys and I would see Lamis’ face in my mind, her beautiful face with the slow smile, and wonder about her in Lattakia. I would pray. I would tell people where those earrings came from if they admired them, and I would ask them to pray for Syria.

I wondered what had happened to Lamis Bitar.

And then just this past month, November, 2014, I had the opportunity to return to Lebanon and Syria with The Outreach Foundation. Steve was with me and Marilyn of course (our fearless leader) and Barbara. We walked through the streets of Homs in Syria, looking at the devastation from three years worth of bombs and mortars, but also seeing the churches beginning to rebuild. There was some hope there. You can read about it in my previous blogs.

And then we went to Lattakia. The third largest city in Syria before the war, had now grown even larger as people found their way there to escape danger in other places. It was relatively safe, although there were still checkpoints and military personnel to be seen. Large as it is it still suffered from the results of the war: high prices and electricity that did not work 24 hours a day. (Think about that for a moment in your own context. How do you manage when the electricity goes out? Maybe for a day, or even rarely for a week? What would you do if it was on for only four hours a day and you didn’t know which four? That is Syria now.)

Joyfully, we were set to visit our friend Rev. Salam Hanna who is the pastor of the Presbyterian Church in Lattakia. It was Marilyn’s first time in this city, although she has been in Syria many, many times. So, of course, it was our first time there as well. It is a beautiful old church, renovated in the last couple of years by its previous pastor. It is also the largest church in NESSL, and we expected a large turnout, and there was one.

I wore my earrings from Lamis, hoping against hope that she was still there and had not already departed for another country.

And in the gathering darkness of night, in the midst of a rainstorm that should have kept everyone away, there she was. My friend Lamis had come to meet the American Presbyterians and I recognized her right away.

We hugged. We reminisced about that women’s conference with the jelly beans. We locked eyes as friends and hugged some more. It was just a moment of pure joy for us both.

And that is why I go. I go to be “with” and to come home, responsible for remembering the people and their stories and to remind the church here at home that there is a church serving in Syria in the midst of war and death and loss and lack of food and fuel and electricity. They are the hands and feet and heart of Jesus walking and loving among those who need the light. And Lamis is one of them and I want you to remember her name and her face and her life.

And I want her to remember me. In addition to the earrings which I was wearing, I now have a beautiful bracelet with a cross. And Lamis has my watch, set to the time in Omaha. When she looks at it, she will know that she has a friend and prayer partner eight time zones to the west who loves her and remembers her.

3 thoughts on “Reunion in Lattakia”