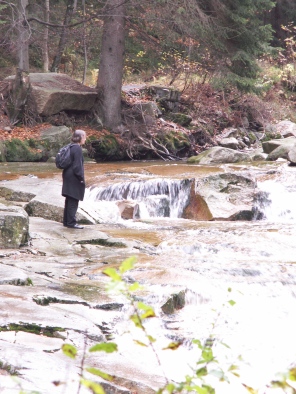 When I need to clear my mind of the jumbled thoughts that cram it up at times, I go for a walk. I can look back in the past fifteen years especially and remember some of those times and those walks.

I remember one I took on the evening of May 17, 2001. I had come home to find a letter in the mail to me from one Steve Burgess. Presumably it was an answer to one I had sent him three days before. Instead of ripping it open to read in that moment of anticipation and wonder, I set out on an hour’s walk to clear my mind of the worst possibilities. I took the dogs with me for company and just walked and walked through the neighborhood, down to Elmwood Park, up through UNO and back. Upon returning home, I took a deep breath and opened the letter. The end of it said something like, “Why don’t you call me when you finish this.” I did. It was life-changing as the next night I went on my first date. Ever.

About seven months later, I took another long walk. It was the morning of December 22, a Saturday. I headed out the door with a mind so full of joy and amazement that I needed to expend the energy. I could have easily driven the eighteen blocks to my dad’s apartment to tell him that his daughter said “yes” to Steve’s proposal, but I walked instead. Actually, I’m not sure my feet really touched the ground, but that’s love, isn’t it?

Steve and I went to the Czech Republic twice to be with the Evangelical Church of Czech Brethren in 2007 and again in 2008. We had a great experience getting to know about our brothers and sisters there in the reformed church, whose beginnings go back to Jan Hus, a reformer 100 years before Martin Luther. At a beautiful church property in the Krkonoše mountains near the Polish border, we had a hike with our team. As we hiked through the forest and along a tumbling stream, I couldn’t help but think of Jana. Jana’s home and heart were in the Colorado mountains and she had walked paths like this so many times. My heart just broke for the fact that her life wasn’t there any more. She was back in Omaha dealing with the reality that her life had gotten smaller due to the seizures which had struck her and sent her back for more emergency neurosurgery. She could no longer hike the mountain paths along tumbling streams as the wind’s song through tall conifers played above and around her. I stopped by that stream and just wept. I found walking by myself away from the group was the only way I could find communion with Jana in her loss and try to absorb this moment for her.

I took another one of those head clearing walks last night. Some days communicating with Jana is hard. Her logic is not our logic. In trying to help her to simplify ordinary tasks, Steve and I have a tendency to push her places she doesn’t want to go. Nor should she have to, but we push anyway. We sometimes push her to the point of tears and it tears my heart apart to see this once headstrong, confident, stubborn woman, broken to this point.

My way to deal with it last night was to put my shoes on and walk. No, I didn’t want Steve to come. No, I didn’t have the company of two four-footed friends as we don’t currently have any. I just went, trying to dump the pain and the hurt by walking.

I noticed a small American flag kicked to the curb in a puddle. It lay there in stark contrast to the one flying high on the flagpole at Memorial Park.

I walked by our next-door neighbor church on my way up to the park. It’s a hurting place now, with both pastors gone. On my way back home, there was an ambulance and fire engine stopped in front, lights flashing. I hope whoever needed them at a meeting that was going on there last evening is fine this morning. But I couldn’t help but think of the irony of emergency vehicles in front of this church in need of rescue and healing.

I noticed that in the dark of seven o’clock in Omaha’s early fall evening I couldn’t tell what colors were blooming in the rose garden of the park. I had just walked there a few days before in the afternoon, and all the colors stood out. But not at night. They all just blended together into a dullness that looked like my heart felt.

It was more of a walk of lamentation.

I came home after that. I’m not sure my mind was cleared of anything. It was just empty. And maybe that was what I was after. Emptiness for just a few moments before I could sleep.

I woke up this morning like every morning. Steve kissed me good-bye. Jana said “good morning.” We had our breakfast together and I took her to the print shop. Normal life returned. A clear mind to start the day. No worries. No drama. No tears. A fresh start.

And it is kind of funny that the verse that comes to mind on a morning like this after an evening like that is from the book of Lamentations:

The steadfast love of the Lord never ceases; his mercies never come to an end; they are new every morning; great is your faithfulness. “The Lord is my portion,” says my soul, “therefore I will hope in him.” (3:22-24)

2 thoughts on “A walk in the dark”