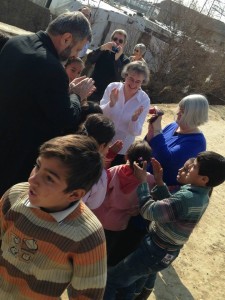 I visited a refugee camp near Zahle, Lebanon, on a trip I made in May, 2013. It was part of a visit of presence to offer fellowship and encouragement to Christian brothers and sisters in the National Evangelical Synod of Syria and Lebanon who were dealing with the refugee crisis from the war in Syria.

Eight months later, in January, 2014, I went back on a similar trip and we visited another camp near Zahle which hadn’t existed eight months before. Instead of visiting a pretty small camp of 45 families, we visited one of two in the area that was now home for thousands of families.

In Lebanon alone, there are approximately 1.5 million refugees from the Syrian war which has raged since March, 2011. It was the onset of that war that had prohibited my wonderful group of faithful women friends from returning to Syria to take part in a women’s conference that would allow more of our Iraqi sisters to join us. So much sorrow and pain is concentrated in this small part of our world. It’s heartbreaking to say it in my most understated words. There is an ever-flowing stream of tears to accompany them.

At that camp last January our group was surrounded by a sight I never expected to see in such a place of sadness. Children singing and dancing came pouring down the dirt road beside the sewage filled canal that drained their camp. Singing. Dancing. Smiling. Laughing. We were swept into their midst and joined in.

From that encounter came this poem:

Down the hill they came running with smiles on their faces
Unusual I thought, in this saddest of places
But they sang and they clapped
Oh my word! How infectious
So we clapped and we smiled in this moment of grace notes.
They grabbed on to our hands and soon came the dance
Round and round we did circle in this desperate land
We kissed and we cooed, just like all children do
Voices raised in sweet choruses of “I love you too!”

It wasn’t ‘til later when I learned that their song
Was a reminder of all in their world had gone wrong
“I used to live in a house” – so it went,
“But now I live here in this land in a tent.
Tomorrow will come and a house there will be
For me and my folks, the whole family.”
It made me so grieved for the horror of loss
I still cannot grasp the heartbreaking cost
Of hatred and war that would drive them away
From the home where they spent every night, every day.

And yet here we were in a circle of glee
And they had this vision, in mind’s eye could see
That where they were now was just temporary
Even though it was alien, maybe even quite scary
It was only a stop on the journey of life
That someday the end would come to this strife
And they would be dancing and singing with glee
Enlarging their circle with people like me
God in heaven above, hear my prayer, let it be.

I came home from that place with an idea I have no clue how to proceed with, but I have. I have a wonderful co-worker, friend and brother in Christ who has taken a version of this poem and put it to music. Mike did it because he could see what I saw with my heart and not with my eyes. I would like to take that song and make a video to share the story of the suffering and the sadness, but also of the hope that exists there, to raise money for the needs of the refugees from this war and the now renewed war in Iraq. I want the video to be able to take on a life of its own – it won’t be mine or Mike’s or whoever can help me make it – but it will be a tool that almighty God can use to bring a small amount of love to a place of overwhelming need.

Please pray with me that God will make a way.